Azerbaijan medical university is the best leading university in Azerbaijan. Azerbaijan State Medical University was founded based on the Medical faculty of the Azerbaijan (Baku) State University on June 19, 1930. Azerbaijan State Medical Institute had got the status of University since February 5, 1991. This grand scientific center has laid the strong foundation of the educational system, as well as given prominent scientists to medical science worldwide. AMU has prepared more than 63,000 fully qualified doctors and pharmacists both for the Azerbaijan Republic and for many countries in the world. This famous university for MBBS in Azerbaijan is 85 years old and has its brand. If you study MBBS in Azerbaijan you will get the best facilities that are 74 different departments set up for specialized teaching to the students. Currently, 1200 international students are studying in 21 different countries. The 6 year MD program (Bachelor level leads to MD equivalent to MBBS in India) is conducted in English. The university has its hospital attached. Medical education in Azerbaijan with a special focus on the Azerbaijan MBBS education system is highly reputed throughout the world. Azerbaijan medical university will provide you the Low-cost tuition fees for MBBS. This University doesn’t conduct any kind of entrance exam for the admission. Indian students get a benefit that if they are applying for MBBS then they are eligible to appear for various licensing exams such as MCI screening test, USMLE -1, PLAB in UK, etc. Azerbaijan can play the role of a springboard for your future. By studying in Azerbaijan you can get Azerbaijan citizenship easily and with this citizenship*, it will be more comfortable to travel many countries, including European countries, without a visa, and some of them with a simplified visa. The level and standard of education in Azerbaijan Universities is very high. Students who have graduated from these universities can find job easily not only in Azerbaijan but also all over the world. If you study MBBS in Azerbaijan then you will get the best learning environment. Azerbaijan Medical University has got an administrative building, 6 teaching buildings, a scientific-research center, a student canteen and buffets, a health resort, a publishing house and newspaper, a big sports complex with a swimming pool, fundamental library, and laboratories. More than 7 thousand students are studying at the 7 faculties, such as General Medicine 1 and 2, Pediatrics, Medico-Prophylactic and Medico-Biological, Dentistry, Pharmacological, Military Medicine. You will get a lot of options to enhance your career in multiple fields of medicine with 500-bed university surgical hospital, 400-bed university medical hospital, 100-bed university oncological hospital, university dental clinic provide medical care for population of the country.
A study in University carries out on 3 languages (Azeri, English, and Russian). Azerbaijan Medical University is a member of Trans-European cooperation between the European Union, Central and Eastern European and Eastern Asian countries on the TEMPUS program in the sphere of Higher Education. 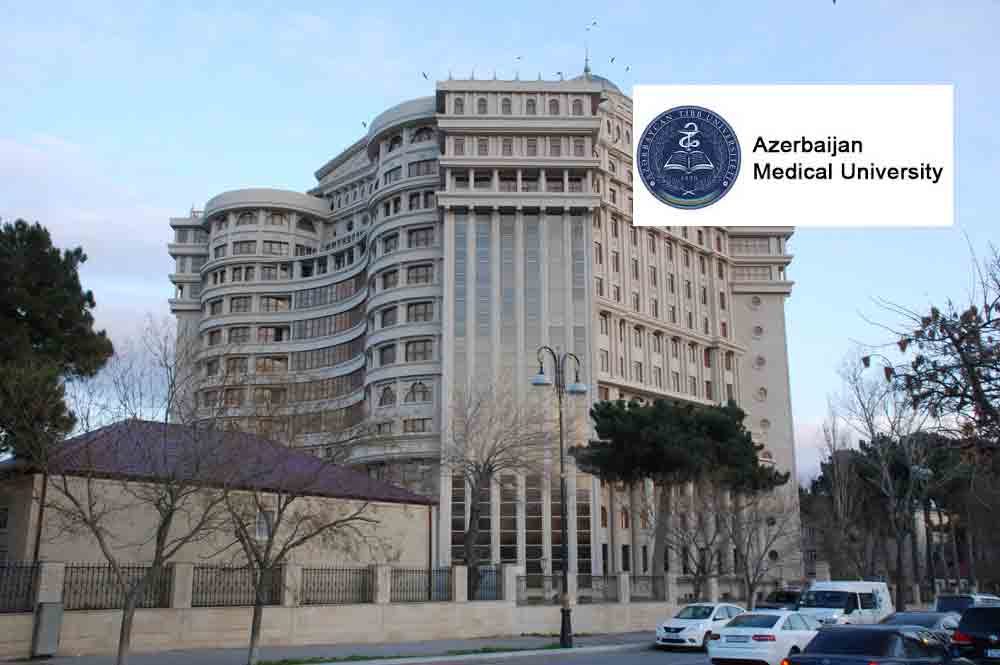 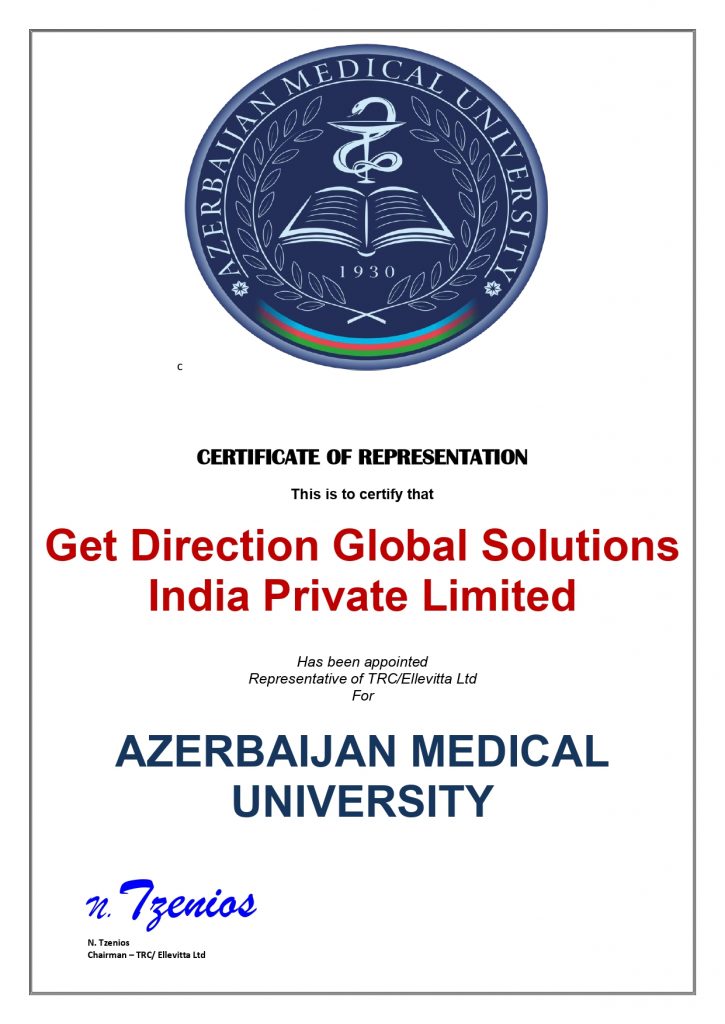 Azerbaijan is one of the modern European countries. Studying in Azerbaijan you will get a chance to have education in 3 languages – Azerbaijan (can be considered a dialect of Turkish language), Russian and English.

The level of education in Azerbaijan Universities is very high. Students, who have graduated from these universities, are able to find job easily not only in Azerbaijan but also all over the world.

Azerbaijan is the most stable country in the world, with the least crime rate.

Azerbaijan is one of the world’s most tolerant and hospitable nations. Here, it is impossible to mention any discrimination on the basis of religion, ethnicity, sexual and etc.

Azerbaijan can play the role of a springboard for your future. By studying in Azerbaijan you can get Azerbaijan citizenship easily and with this citizenship it will be more comfortable to travel many countries, including European countries, without a visa, and some of them with simplified visa

Historically, Azerbaijan has been considered as a crossroad between Asia and Europe. Nowadays Azerbaijan and its capital Baku is home to various global projects and events in the field of energy, economy, transport and sport.

Azerbaijan has become one of the most popular tourist destinations of the region. Each year more than 5500 international students come here to study, enriching multicultural environment of the country.

As a young and promising Country, Universities feels proud to host students, faculty and staff members from 43 different countries of the world

Azerbaijan is one of the fastest-growing economies of the Eurasia and therefore, seeks to enhance its global position as an education destination for students from neighborhood and all over the world. Degrees are taught only in English with Supportive environment

Azerbaijanis are known for their warmth and hospitality. Very soon you will enjoy drinking Azerbaijani tea and talking with friendly locals who will invite you to dinners.

Education in Azerbaijan can be an affordable way of getting high quality degrees taught in English. While there is no compromise in academic excellence, both tuition and living expenses remain considerably lower than most of the traditional education destinations

Azerbaijan Medical University has a student friendly campus which provides Us Education in best way as possible. Teachers here are very supportive and the curriculum followed here mainly focus on practical skills rather than theoretical knowledge. Also the syllabus gives us ambient time to learn things and the Academic years are divided into semesters which gives us access to learn things in a better way. Hostel is provided by the university itself which is situated in the close perimeter of the university. Also the atmosphere here mainly focuses on decreasing stress as portions are taught in a slow and understanding manner. Hostel has ambient facilities which mainly includes WiFi, laundry etc. Indian Mess is also available. A kitchen is also provided in the hostel for students who wish to prepare dish themselves. Seniors here are very supportive and boost our life here more joyful. The City of Baku is a very beautiful city to stay with peaceful atmosphere. Even though the city is little bit expensive the quality of goods available here are worth for the money we spent. Overall Azerbaijan is a friendly and beautiful place to study understands and lives.
ThanksVARUN
I feel immense pleasure in conveying my opinion about Azerbaijan Medical University, its hostel and the beautiful, scenic city, Baku Talking about the medical field, its known to everyone that it is not a piece of bread for those who don't have the will to work hard; and sometimes even smart work is much important than hard work. Because this university prefers the smart work. ABOUT UNIVERSITY: 1. Vast area with a charming infrastructure; 5 separate buildings with various departments 2. Convenient class timings with breaks to ease our minds 3. British curriculum is followed in this university which improves our chances of passing entrance exams in future 4. Less stressful as compared to the Indian system 5. Cost-effective canteens available in every block 6. Bone libraries and study hall available 7. Fresh cadavers (unlike the dummy provided by other foreign universities) also shown for better understanding 8. Exams are computer-based. THE HOSTEL: 1. Free WiFi 2. Attached balcony 3. 3-bedded rooms with attached bathroom 4. Fridge provided COUNTRY: An exquisite, must-visit place

ThanksBhargavi
This Is Muhammad Usama Qadir. I'm a foreign student. Im a student in Azerbaijan Medical University. It’s a very good university and the faculty is very supportive and helpful. It is same with the university hostel, to some extent we feel at home here. On top of that everybody here is very friendly.

May I help you?

Support Get Direction Global
× May I help you?